Gruppo Romani has announced the acquisition of 100% of Ceramica Verde 1999 - Campogalliano Ceramiche, a strategic move that reflects the group’s increasingly ambitious vision for the future.

Gruppo Romani (Casalgrande, Reggio Emilia) has announced the acquisition of a 100% stake in Ceramica Verde 1999 - Campogalliano Ceramiche. This strategic deal is part of a broader export-focused growth project that aims to expand the group’s product range by acquiring complementary lines to those offered by its Serenissima, Cir, Cercom and Cerasarda brands and its subsidiary ISLA Tiles.

Thanks to its determination and creativity coupled with a strong focus on design and technological research, Ceramica Verde 1999 has succeeded in communicating the value of Italian-made tiles throughout the world. The Fiorano Modenese-based company has grown steadily during its twenty years in business and expects to post a turnover in excess of €15 million in 2021.

“With this important acquisition we have invested in an internationally recognised company with a strong focus on exports,” commented Giorgio and Paolo Romani, respectively Chairman and CEO of Gruppo Romani Industrie Ceramiche S.p.A. “The sales channels will remain independent and Daniele Verde will stay on as brand CEO for the coming years, assisted by his wife Ellen Bachman as head of new product research and development.”

“The integration of a brand with a manufacturing company equipped with modern, state-of-the-art facilities is certain to bring synergies, mutual benefits and the potential for further growth of the brand, as well as the possibility of acquiring new market shares,” says Daniele Verde.

Ceramica Verde 1999, acquired by Gruppo Romani’s subsidiary RGP srl (an effective formula that has already been tested with the acquisition of Isla Tiles through the subsidiary NGT), will continue to operate independently in the market through a new sales network that will be able to exploit the Group’s synergies.

A world leader in the production and marketing of ceramic tiles, Gruppo Romani produces around 8 million square metres per year at its three production facilities in Rubiera, Roteglia and Olbia. In 2020 it posted a turnover of more than €100 million and is expecting to report above 20% growth in the current year. 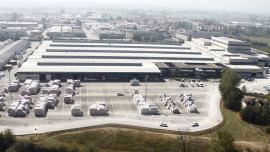 The challenge to reduce consumption and consume more responsibly has led the Italian ceramic group to invest in new cogeneration and photoelectric systems.

Showcase of Technological Innovations by Durst at TECNA 2022