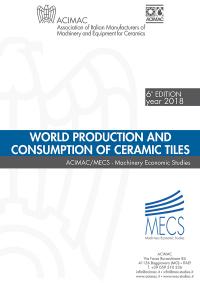 The sixth edition of the publication “World production and consumption of ceramic tiles” produced by the Acimac Research Department will be released in October. Consisting of 260 pages of graphs, tables and commentary, it provides detailed analysis of the ten-year trends up to 2017 in industry, markets, per capita consumption and export flows in large geographic regions and in the 76 largest tile producer, consumer, exporter and importer countries.

Referring to the year 2017, the report shows a weaker growth of around 2.2% for both global tile production (13.5 billion sqm) and consumption (13.3 billion sqm), in comparison to the fairly dynamic performance in 2016. And after slowing during the previous year, import-export flows dropped by 1.4% to 2,754 million sqm, the first fall since 2009.

Production in Asia rose by just 0.9% to 9,438 million sq.m due to the combined effect of a fall in production volumes in China and Indonesia and growth in India, Vietnam and Iran. Europe registered a more substantial growth, producing a total of 1,977 million sq.m (+4.4% in the EU-28 and +7.3% in non-EU Europe), while in the American continent, total production remained essentially stable (1,436 million sq.m). The development in Africa is noteworthy: the African continent has seen very significant growth over the last 2-3 years, reaching an output of 696 million sq.m in 2017. In addition to Egypt, Nigeria, South Africa and the Maghreb countries, a further 7 Sub-Saharan countries (Ghana, Tanzania, Angola, Sudan, Uganda, Ethiopia and Kenya) have now joined the ranks of African tile producers as a result of Chinese investments in the continent, albeit with fairly low output volumes of between 10 and 30 million sq.m.

The fall of world exports in 2017 was attributable to the sharp fall in Chinese exports (a drop of 117 million sq.m), only partly offset by growth in the other 5 large exporter countries, namely Spain, Italy, India, Iran and Turkey. As for macro-regions, Asia registered a 4.6% fall, while Europe marked up export growth from both the European Union (+1.2%) and non-EU European countries (+12.2%).

Read the complete article published on Ceramic World Review no. 128/2018